Vaibhav Pataskar has played this scam so smartly that nobody is able to catch him for the near 300 to 500 crore Ponzi Pyramid scam by the company named Osmose Technology Pvt Ltd.

As we have seen everything in detail about this whole scam, that how this company manipulated gaming subscriptions to lure people into the Ponzi pyramid scheme, and their directors and core members earned more than crore rupees in just 2 to 3 months. This person was the main culprit from the beginning of this scam because he is the MASTERMIND. This video below is somewhere between November December 2020 in which he is mentioning migrating to International business from the national business plan. If you want to know about their national and international plan you may have to read previous blogs on this scam (all the parts are in one place, please read it here).

Vaibhav Pataskar is the director of four companies at the moment as per MCA details. You can see in the below image.

Let’s now see these two companies Dragonfleet Games Private Ltd. and Mindskill Gaming Solutions Pvt Ltd. in detail, because it has direct connections to what they did in Osmose Technology scam.

Now, the basic question arises here, why do these two people are the directors of two different companies working on the same thing? that is gaming solutions (development of online games). This is where this scam gets very interesting. Vaibhav Pataskar never had legal connections directly with Osmose, he formed this company Osmose Technology to do MLM business in the name of gaming subscriptions, so that if they get caught these two companies will be safe and the directors of Osmose Technology will be caught for doing money circulation scam.

And this other director of both these company Sumit Sharma (alongside Pataskar) he is actually working as a manager in Osmose Technology Pvt Ltd. You can see his Linkedin details in the below image.

And if you have read the blog on that fake advocate we have written, who was sending one crore defamation notices, he was also mentioning the name Sumit Sharma in the first video in that post. You can see there is a clear connection between these two companies with Osmose Technology. We are not here to give judgments whether or not this person Vaibhav Pataskar is guilty. It’s police or investigation agencies and especially the Judiciary to decide who is guilty and who is not!! But we are trying to give as many details on this scam as possible.

If you are thinking that how we can legally prove that this person is the mastermind, all those people who were working as core members and team leaders are the witnesses who can tell the police about his involvement. and you can see this video below this person was mentioning his name in their achievement ceremony in Pune.

Now let’s look at the Mindskill gaming solutions involvement. The whole drama of their advertisement revenue was totally dependent on the games developed by Mindskill which Osmose Technology was using for its MLM business.

Look at this above screenshot on the right side, do look at the screenshot dates we had taken these images from playstore. These dumb people don’t even know they had to change it to Osmose Technology Pvt Ltd from Mindskill solutions. but they have named it Osmose Technologies Pvt Ltd. and all these games were actually available from the month of November – December 2020, then how did they manage to generate money from March to October 2020 in which time they were actually doing their so-called National business plan, of course, they were circulating the money to users they had collected in the form of subscription amounts.

The biggest question is that if this person Vaibhav Pataskar has any legal proof that he sells these games under the name of Mindskill to Osmoe Technology then how come they were using the name Mindskill in playstore? We can actually help police or any investigation agencies over this as we can easily bust this person with website details and especially Adsense details through which he might have earned money under Mindskill gaming solutions. And there were some other games as well which were available from this Mindskill but they were not available in playstore like fantasy games, etc in which also they used these users which were generated through MLM structure to get more users to their games.

Another game by the name Ludoskill is actually developed under the company name Dragonfleet games Pvt Ltd. and there are two websites available for the same games, they might have created a new website for the cover-up under the Osmose Technology name so that this company Dragonfleet can get away easily. There’s a lot to mention about games which we will see in the next blog especially about how this company actually made everyone fool to use their games and generate money under MLM. Now, let’s look at his wife’s connection in this whole scam.

So, these two companies develop games and they both have been registered for quite 1 to 2 years now, suddenly they sell games developed by them to Osmose Technology and that too in the month of November December 2020?? They started taking subscriptions in the month of March 2020. Don’t you see suspicious activity here!! Just because he has legal documents to prove that he has sold these games to Osmose Technology doesn’t make him innocent at all. We believe Police will take care of it, that how to take the words out of people’s mouths, that’s not our work nor do we have any right to do something like that.

His Connection with Osmose Technology

Shubhangi Pataskar – if you have read the previous blogs we have written against this company, you may already know her name, she is the wife of this person Vaibhav Pataskar. What was her role? She was the Director of this company Osmose Technology when this company was first registered in the ROC-Pune on 24th December 2019.

Later she stepped down as a director on the 15th of October 2020 and Avinash Asabe took her place as a new director (you can see the details of MCA in the below image), and we have all the details on this person in the previous blogs (even his audios).

Not just that, there’s a third change in directorship within a year of company formation, you can see at the below MCA records on the day of 1st anniversary of their company registration they all stepped down as Directors replacing some two new names which are allegedly to be some of their office level people. Wondering how we come to know that? Someone who was their team leader in the past contacted us through Instagram, you can see the image in the below tweet.

Three changes in a year, have you seen a company like that anywhere? Maybe they have some pratha of changing directors every 4 months. Definitely, they know what they did was a scam but they had some fake Advocate with them, so why would anyone even will try to complain about this scam to the police station? You will understand everything if you read the past 7 parts we have written, and especially don’t forget to read about so-called advocate. A world-famous Advocate ANANDA DEVIDAS BHAGAT.

One of this company's (Osmose Technology) team leader contacted us through our Instagram pic.twitter.com/8aFO3WXIjN

This person used Mr. Prakash Javedkar as well to gain the user’s trust. We hope whoever this person Vaibhav Pataskar is, will be investigated fairly and punished for this whole scam and all other people who made some crores or lakhs under this scam. Bank details and the cryptocurrency wallets beloging to these people will reveal everything. The Osmose Scam.

Thank you for reading and don’t forget to share. We want these people to be exposed soon so that all other scams will also come into the open domain which is working on the same pattern.

Follow me @
Sudarshan Kotian
Founder & Editor at Viewsnews - Informative Blogs
A thinker, observer. My mind is an ocean full of thoughts that wants to come out in the form of words. I can write about anything that flows through my mind for the betterment of society.
An unemployed engineer (Mechanical Engineer-MU)
From Andromeda Galaxy 👽 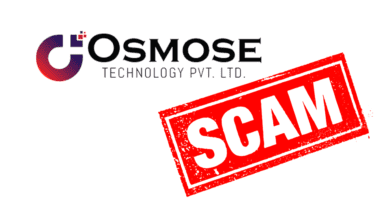